The Prodigal Son: Pig Pen, or the Big Pen? 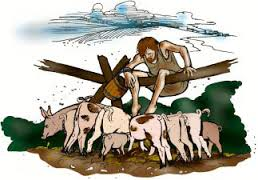 I remember when we first started our church up in Ottawa, we had no place to meet, so we met in a football change house in Debra Dynes community. At the time, Debra Dynes, was one of the illicit drug capitals of the city, and as we would leave our little Bible studies, there would be gang bangers hanging around smoking dope, high as a kite, and initially, they nick named me ‘Preach’.
“ Hey Preach, they would taunt, what’s the Word of the day?”
My wife, who had never been involved in the drug scene, would encourage me to walk away from these mockers, but I would always stop, get in the midst of the 30 or so tweaking and bouncing freaks, and preach to them the love of Jesus.
This went on for awhile, so they changed my nickname from ‘Preach’ to ‘Jesus’, and it got kind of comical hearing them, ‘Hey Jesus! What’s the Word of the Day?’

They thought they were pretty smart, laughing at me in my suit with my Bible. I remember one bold gang member trying to put a joint to my lips saying: ‘Here preach, take a hit, looks like you had a pretty tough week.” I saw in this teen actual compassion, he was so messed up, he thought he was seriously trying to help me!
One night, I felt the Holy Spirit come upon me, and I proclaimed: ‘Hey guys, I got a word for you, straight outta the good Book’
At that time, one of my friends who served as the prison chaplain, was on a six week sabbatical, and had asked me to cover services for him in the youth detention block of the local prison. I spent a most of the day each Thursday going from cell block to cell block holding a series of youth services, preaching, praying, and referring for counseling the youth that had been arrested that week.
As these gangsters were cutting up and trying to blow dope smoke in my face, I read them the story of the prodical son. Made it plain: How the young man in the story couldn’t wait until his dad died to get his inheiratance, but wanted his money now. Basically saying to his dad, ‘I wish you were dead’, and his wise, and heartbroken father, actually gave him his money, and the boy went on a spending spree of wine, women and song. Yet, the money ran out, and there came a recession in the country, and his so called friends all left him high and dry. The only thing the boy knew was farming, so he got himself a job slopping hogs, working on a pig farm,that paid so little, that he was so hungry he thought about eating the pig slop. Finally, the young man came to himself in the pig pen, and realized that even the hired hands at his fathers ranch were paid better, and treated better, and then he realized he had sinned against God and his father. He decided that if he was going to have to work for someone, that his father was a better boss than this pig farmer, and he decided to go home. His father saw him coming,

and ran out to meet him, and he said ‘Father, I have sinned against God and you, please hire me as a servant in your house.” Yet, the boy had no idea how much his father loved him, and his father brought the best robe, shoes, and placed the family ring again on his finger, and said, ‘My son who was dead,

is now alive, he has come home’ and he killed the fatted calfand threw a big party for him.
It had gotten quiet in that circle for a minute, and I looked these hardened criminals in the eyes and said: ‘Boys, God loves you, and you have a Father in heaven that has a wonderful plan for your life. He wants you to come home. Though you may not see it yet, right now, you are in the pig pen, partying, thinking there are no consequences for your actions. Tonight, I pray you listen to me, and give your life to Jesus, but if you do not, know this: Every Thursday this summer, I will be holding services in the youth detention block of the jail, if you will not hear me here, in the pig pen, maybe you will listen to me downtown, in the big pen.’
Uproarious laughter! To their drug induced minds, this was the funniest story they ever heard!
“Give me five preach! Pig pen or Big Pen!, preach got lines!” they said, thinking I was joking.
Yet, one week later, I guess narcotics officers raided one of their crack houses, and when I went in to the prison, there they all were, looking like lost puppies, heads hung low, broken.
So, I laughed and said:
“Come on boys, to chapel. I still have good news for you. God still loves you, and Jesus is still the way out of this place. You wouldn’t listen to me in the pig pen, and here we are together, in the big pen.’
To the glory of God, all of those boys accepted Jesus that day, and many were set free of addictions, healed in their bodies, and some were filled with the Holy Spirit with the evidence of speaking in other tongues.’
Over the next year or so, I was able to work with their families, foster care, the chaplain and the courts, to get many of these help they desperately needed to make a clean break with a life of crime. To God be the glory!
Let’s Pray:
‘Father, help me to be unafraid of reaching out in love to people that look scary, or who are obviously criminals. Give me special faith, to love them in the midst of their mess, out of the pig pen, big pen, and back into your house of grace, honor, and mercy. Show them your love, power, and plan for their lives, in your name I pray Lord Jesus, Amen’