In today’s reading, we read the 105th Psalm. Please read it for yourself: Ps 105:6 O ye seed of Abraham his servant, ye children of Jacob his chosen. Ga 3:7 Know ye therefore that they which are of faith, the same are the children of Abraham. Ps 105:17 He sent a man before them, even […] 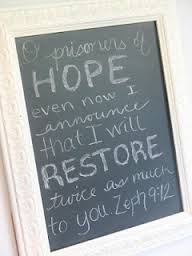 In today’s reading, we read the 105th Psalm. Please read it for yourself:

Ga 3:7 Know ye therefore that they which are of faith, the same are the children of Abraham.

18 Whose feet they hurt with fetters: he was laid in iron:

19 Until the time that his word came: the word of the LORD tried him. 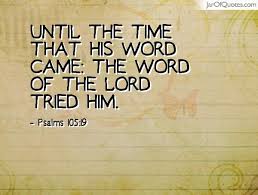 I wish to focus on v19,  Until the time that his word came: the word of the LORD tried him.

Joseph had a dream from God as a young man, and it was authentic. He would become the prime minister of Egypt. He believed that word, and then all hell broke loose against him. Instead of his brothers rejoicing and participating in his development willingly, they beat him up, threw him in a well, and sold him into slavery. Then, as God promoted him as a slave, he was falsely accused, and thrown into prison, and God was with him. Then, the chief cup bearer for Pharoah and baker ended up in prison, and Joseph’s gift of dream interpretation ‘read their mail’.

Looked like, finally Joe was headed for freedom, but nope, not yet…

There was a set time appointed by the Father for Joseph, and his life was on hold, while Egypt was being prepared for his leadership.

I love this verse. Joseph had a word from God!

Yet the very word he had received, tried him!

He had to believe he had heard God, no matter what the circumstances looked like…

Was Joseph trying the word of God?

Nope, the Word of God is already tried.

Ps 18:30 As for God, his way is perfect: the word of the LORD is tried: he is a buckler to all those that trust in him.

Ps 12:6 The words of the LORD are pure words: as silver tried in a furnace of earth, purified seven times.

So the word of God is already tried, God is holy and cannot lie.

It is us that need refinement, and believing a personal promise from God, when every circumstance is against us, provides that refinement.

Joseph is not alone in his trial, you and I are being tried too…

Job 23:10 But he knoweth the way that I take: when he hath tried me, I shall come forth as gold.

Faith is a heavenly substance, and after we have believed we received, then what?

Then there is Bible hope.

“ If you look up the Greek definition of the word hope, you’ll find it means “to be intensely expectant, to be confidently looking forward to something you fully expect to happen.”

You can see this kind of hope in action in Philippians 1:19-20. There, the Apostle Paul says:

“I know that this shall turn to my salvation through your prayer, and the supply of the Spirit of Jesus Christ, according to my earnest expectation and my hope…”

For emphasis, Paul used the two Greek words there that mean earnest expectation.

In other words, he was saying to them, “This thing is so inevitable I’m just burning up with expectancy!”

This sheds a brand new light on this wonderful verse brought before us pastors Terri and Steve Spanish of Victory.com, when we attended their connect group:

Zec 9:12 Turn you to the strong hold, ye prisoners of hope: even to day do I declare that I will render double unto thee;

When pastor Terri uttered those words, they literally leapt off of the page for me, under the illumination of the Holy Spirit.

Here is what I saw, clearly that night!

The very word from God that we have believed, is what makes us a ‘prisoner of hope’. We see clearly by the illumination of the Holy Spirit, the vision of God for our lives, and no matter what the daily circumstances scream, we are captive to the vision. We have believed we have received, and each day, we fully expect that today is going to be the day it comes to pass!

This captivity, this heavenly vision, this faith in action, is what empowers us to:

2Ti 2:3 Thou therefore endure hardness, as a good soldier of Jesus Christ.

It empowered the apostle Paul, when he cheerfully proclaimed the gospel in chains:

Ac 26:19 Whereupon, O king Agrippa, I was not disobedient unto the heavenly vision:

The kingdom of heaven suffers violence, and the violent take it by force!

We are in a war, it is the fight of faith!

To believe when it looks impossible, because faith makes the impossible, possible, in fact, inevitable!

When we have authentically heard God, that which He has spoken, tries us, refines us, forces us to grow, to discipline ourselves, to get equipped, trained, fit for service.

I believe this is what sustained Nelson Mandela through his years in prison, before becoming the first black leader in apartheid South Africa. God raised him up, through hardship, to be a vessel of great wisdom, compassion, mercy, strength, and forgiveness, in prison.

I believe he knew he would be President for many, many years before it happened, and that this inward knowing was his faith in operation, and that this word from God, tried him, just like it tried Joseph.

How about Martin Luther King? The words, ‘I Have A Dream!’ have been a battle cry against racism here in the United States since he rallied this nation to confront this great evil. He died for what he believed, yet his work is immortal, and still goes on today, for there is power in heavenly vision.

Think about President Abraham Lincoln: his repeated failures, yet, one of the greatest Presidents to ever live: http://www.abrahamlincolnonline.org/lincoln/education/failures.htm

As Paul Harvey says, ‘now for the rest of the story!”

Isa 61:7 For your shame ye shall have double; and for confusion they shall rejoice in their portion: therefore in their land they shall possess the double: everlasting joy shall be unto them.

Both yours and mine days of promotion and prominence will indeed come to pass, as we move forward in obedience to Holy Spirit, after we have believed we received.

Heaven is on its feet, the great cloud of heavenly witnesses, watching our course with joy, eternal testimony being written on parchment of time, we call, history.

Indeed it is HIS story, written in eternal record for all the universe to see, when we victoriously serve Jesus in this life!

Let the process have its work in you, remember, we never try the Word of God, it is trying us!

‘Father God, I ask for confirmation, strength, encouragement, and fresh revelation of the vision for my brother or sister today. May we walk out, without compromise, the heavenly vision, and come out of this trial, perfect, entire, and lacking nothing. We ask this Father, in Your name Lord Jesus, Amen’