It is time to write of my thanksgiving to God, my family, this country, and all the great churches we have visited or been a part of over the years. I am so grateful for all the people who have helped us make the impossible, possible – people of great hearts and generosity that have made our lives enriched in so many, many ways.

I am thankful to Jesus, for His life, His love, His plan, His comfort, direction, grace and power and purpose to serve this generation,

And, I am like the one leper who found healing, I have come back to Him, again, today to simply say, Thank You Lord, for everything! 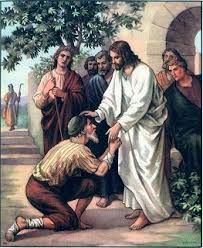 Jesus expects a thank-you, and truly, giving thanks, completes our miracles. Let’s look at:

Luke 17:11 And it came to pass, as he went to Jerusalem, that he passed through the midst of Samaria and Galilee. 12 And as he entered into a certain village, there met him ten men that were lepers, which stood afar off: 13 and they lifted up their voices, and said, Jesus, Master, have mercy on us. 14 And when he saw them, he said unto them, Go shew yourselves unto the priests. And it came to pass, that, as they went, they were cleansed. 15 And one of them, when he saw that he was healed, turned back, and with a loud voice glorified God, 16 and fell down on his face at his feet, giving him thanks: and he was a Samaritan. 17 And Jesus answering said, Were there not ten cleansed? but where are the nine? 18 There are not found that returned to give glory to God, save this stranger. 19 And he said unto him, Arise, go thy way: thy faith hath made thee whole.

Jesus heals, performs miracles, gives us purpose and direction for our lives, and all He expects, is that we say, like this leper: ‘Thank-you!”

Why did only one cleansed leper return to thank Jesus?  The following are nine suggested reasons why the nine did not return:

One waited to see if the cure was real.

One waited to see if it would last.

One said he would see Jesus later.

One decided that he had never had leprosy.

One said he would have gotten well anyway.

One gave the glory to the priests.

One said, “O, well, Jesus didn’t really do anything.”

One said, “Any rabbi could have done it.”

One said, “I was already much improved.”

Charles L. Brown, Content The Newsletter, June, 1990, p. 3
I read the following little story, and it makes this Bible story, so much more relevant today:

Thankfulness seems to be a lost art today. Warren Wiersby illustrated this problem in his commentary on Colossians. He told about a ministerial student in Evanston, Illinois, who was part of a life-saving squad. In 1860, a ship went aground on the shore of Lake Michigan near Evanston, and Edward Spencer waded again and again into the frigid waters to rescue 17 passengers. In the process, his health was permanently damaged. Some years later at his funeral, it was noted that not one of the people he rescued ever thanked him.

Enter into his gates with thanksgiving, and into his courts with praise: be thankful unto him, and bless his name.

Have you taken time to thank Him today?:

‘Father, Creator of all life, I come to you this day, simply to say ‘Thank-you’ for all you have given to me, my family, our country, and Your church. Thank-you Jesus for dying for me upon the cross, and that you having risen from the dead, live forevermore, that we too, might experience eternal life in You. Please come into our lives, our families, our churches, and again into this nation, that like the leper, we might be made whole in You. Amen’

For those of us who have the privilege of living in this incredible nation named the United States of America, please be reminded of why, historically, we celebrate Thanksgiving: 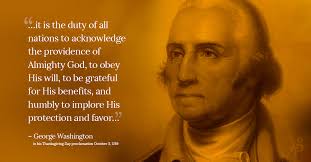 Whereas, it is the duty of all nations to acknowledge the providence of Almighty God, to obey His will, to be grateful for His benefits, and humbly to implore His protection and favor; Whereas, both the houses of Congress have, by their joint committee, requested me

“to recommend to the people of the United States a day of public thanksgiving and prayer, to be observed by acknowledging with grateful hearts the many and signal favors of Almighty God, especially by affording them an opportunity peaceably to establish a form of government for their safety and happiness!”

Now therefore, I do recommend next, to be devoted by the people of the states to the service of that great and glorious being, who is the beneficent Author of all the good that was, that is, or that will be, that we may then all unite in rendering unto Him our sincere and humble thanks for His kind care and protection of the people of this country. 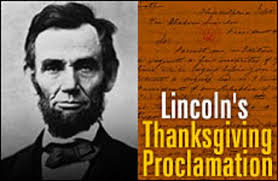 Two 1863 Thanksgiving Proclamations which are said to be by Lincoln.

The year that is drawing towards its close, has been filled with the blessings of fruitful fields and healthful skies. To these bounties, which are so constantly enjoyed that we are prone to forget the source from which they come, others have been added, which are of so extraordinary a nature, that they cannot fail to penetrate and soften even the heart which is habitually insensible to the ever watchful providence of Almighty God.

In the midst of a civil war of unequalled magnitude and severity, which has sometimes seemed to foreign States to invite and to provoke their aggression, peace has been preserved with all nations, order has been maintained, the laws have been respected and obeyed, and harmony has prevailed everywhere except in the theatre of military conflict; while that theatre has been greatly contracted by the advancing armies and navies of the Union.

Needful diversions of wealth and of strength from the fields of peaceful industry to the national defence, have not arrested the plough, the shuttle, or the ship; the axe had enlarged the borders of our settlements, and the mines, as well of iron and coal as of the precious metals, have yielded even more abundantly than heretofore.

Population has steadily increased, notwithstanding the waste that has been made in the camp, the siege and the battle-field; and the country, rejoicing in the consciousness of augmented strength and vigor, is permitted to expect continuance of years with large increase of freedom.

No human counsel hath devised nor hath any mortal hand worked out these great things. They are the gracious gifts of the Most High God, who, while dealing with us in anger for our sins, hath nevertheless remembered mercy.

It has seemed to me fit and proper that they should be solemnly, reverently and gratefully acknowledged as with one heart and voice by the whole American People.

I do therefore invite my fellow citizens in every part of the United States, and also those who are at sea and those who are sojourning in foreign lands, to set apart and observe the last Thursday of November next, as a day of Thanksgiving and Praise to our beneficent Father who dwelleth in the Heavens.

And I recommend to them that while offering up the ascriptions justly due to Him for such singular deliverances and blessings, they do also, with humble penitence for our national perverseness and disobedience, commend to his tender care all those who have become widows, orphans, mourners or sufferers in the lamentable civil strife in which we are unavoidably engaged, and fervently implore the interposition of the Almighty Hand to heal the wounds of the nation and to restore it as soon as may be consistent with the Divine purposes to the full enjoyment of peace, harmony, tranquillity and Union.

It is the duty of nations as well as of men to own their dependence upon the overruling power of God; to confess their sins and transgressions in humble sorrow, yet with assured hope that genuine repentance will lead to mercy and pardon; and to recognize the sublime truth, announced in the Holy Scriptures and proven by all history, that those nations are blessed whose God is the Lord.

We know that by His divine law, nations, like individuals, are subjected to punishments and chastisements in this world. May we not justly fear that the awful calamity of civil war which now desolates the land may be a punishment inflicted upon us for our presumptuous sins, to the needful end of our national reformation as a whole people?

We have been the recipients of the choisest bounties of heaven; we have been preserved these many years in peace and prosperity; we have grown in numbers, wealth and power as no other nation has ever grown.

But we have forgotten God. We have forgotten the gracious hand which preserved us in peace and multiplied and enriched and strengthened us, and we have vainly imagined, in the deceitfulness of our hearts, that all these blessings were produced by some superior wisdom and virtue of our own. Intoxicated with unbroken success, we have become too self-sufficient to feel the necessity of redeeming and preserving grace, too proud to pray to the God that made us.

It has seemed to me fit and proper that God should be solemnly, reverently and gratefully acknowledged, as with one heart and one voice, by the whole American people. I do therefore invite my fellow citizens in every part of the United States, and also those who are at sea and those who are sojourning in foreign lands, to set apart and observe the last Thursday of November as a day of Thanksgiving and praise to our beneficent Father Who dwelleth in the heavens.